Osteopathy was discovered by the American Andrew Taylor Still, who was a country doctor. Still was the son of a Methodist preacher and was familiar not only with spiritual guidance, but also with simple traditional medicine.

He spent the first decades of his life in the wild natural surroundings of the borderland to the virgin West. Although Still’s education was extremely rudimentary, he was a very close observer of nature during this period and acquired a unique functional knowledge of anatomy.

Still played an active military and political role in the American Civil War on the side of the opponents of slavery. His fate took a decisive turn in 1864, after his return from the war. Three of his children died within a few days during an epidemic of meningitis. Shortly after, a fourth child died of pneumonia, even though he had consulted the best doctors and preachers in the area. Still was so disappointed that he abandoned “heroic medicine” and all religious institutions, in the attempt to find a better form of medicine. He started to take an interest in the spiritual movements of his time: American transcendentalism, phrenology, mesmerism, magnetism, and also bone setting, as practised by the medicine men of the Shawnee Indians.

Still also attentively studied highly complex philosophical treatises, such as those written by Herbert Spencer, the founder of evolutionary theory, and current developments in European medicine. In this period,he also acquired knowledge of mechanics and electricity. Still’s open mind towards spiritualism was particularly controversial. Seances, an Indian medium and his later membership in a freemason lodge all bear witness to his broad interest in this area too. However, few of his critics were prepared to acknowledge that, however eccentric his behaviour was, he applied what were for the period the strictest scientific standards. Everything that could be implemented in practice and which appeared to be of use to his patients was integrated into his osteopathic system and the rest was rejected – totally independent of current fashions, expert opinions, traditions or specialized literature. Still thus embodied the ideal of a neutral empiricist.

The result of Still’s long and intensive search was the discovery of a new medical philosophy – osteopathy, whose date of birth he describes to be 22 June 1874. This was centred on the perfect creation as the expression and work of an unnameable higher power. The individual structures and the functional connections both within and between them were subject to harmonious laws. Still also applied this conviction to man. He developed the concept of the triune man – the triply differentiated unity of man – with the unity of body, spirit and soul. He recognised this as creation’s perfect self-healing mechanism. The optimal function of “God’s pharmacy” therefore essentially depends on the supply and removal of nervous energy, blood and lymph, to and from the body. If these pathways are blocked, this hinders the self-healing mechanism and the corresponding organs become sick. Still regarded the spinal column as the centre of peripheral supply and this is why he looked for displaced vertebral bodies in most diseases, even internal diseases. He assumed that malposition of the vertebral bodies inhibited the function of surrounding nerves and vessels and attempted to reposition them specifically by gentle manipulations. Manipulation of a bone (Greek: osteon) assured supply and removal, the self-healing mechanism could become active again and there was a positive effect on the disease (Greek: pathos).

Still regarded treatment with drugs as proof of a lack of confidence in the powers of nature and categorically rejected this, just as he rejected premature surgery. According to Still, the osteopath was simply a mechanic with complex ideas and the perfect creation was the healer. As a consequence, the osteopath was never directly responsible for the cure, but was simply the intermediary between the patient and the freely acting creation.

In the mid-1870s in Kirksville, Missouri, Still finally obtained the recognition he deserved for his extraordinary dexterity, his enormous general scientific knowledge, his intense spiritual experience of life and his dogged ambition. Because of the enormous success of his treatments and his exceptional ability to use his immense general knowledge to recognise functional interconnections with no effort, his reputation as “wonder healer” spread rapidly. Encouraged by his patients and even some doctors, at the age of 64 Still finally founded the first osteopathy training school in the world, the American School of Osteopathy (ASO) in Kirksville in 1892. The triumphant march of osteopathy had begun.

In 1910, the American Medical Association initiated a state investigation of all medical training centres in America. This was intended to guarantee further financial support only for those candidates which fulfilled specific criteria in the evaluation. The standards of the medical universities – including pharmacy and pharmacology – were used as the basis. The so-called Flexner Report resulted in almost all osteopathy colleges distancing themselves increasingly from Still’s original concept to guarantee their economic survival. Therefore, most osteopaths in the USA now regard manual techniques as being of little importance. What was even more unfortunate was that the central concept of the triune man – with the conviction of a perfect self-healing mechanism subordinate to a spiritual power – was expelled from osteopathy. Thus osteopathy drifted more and more towards allopathic medicine.

At the turn of the century, Still returned to his favourite occupations: observing nature, internal development and social exchange of opinions. Although he was revered by this students and patients, his faculty became increasingly alienated from “the old doctor.” In particular, they had no sympathy for his stubborn refusal of any sort of medication and his resumption of research in spiritualism. Still was not distracted and continued his studies and his attempts to fathom the mysteries of osteopathy free of prejudice. In 1917, more than 50 years after the start of his career as a simple country doctor, Still died. He had discovered one of the most important medical philosophies in the history of mankind, osteopathy, centred on the triune man as part of a perfect creation.

In 1900 the American-trained osteopath Arthur S. Burgess (born in 1873) in Montreal, published the first, and only, issue of a journal, ‘The Canadian Osteopath’.

There continues to be no osteopathic medical schools anywhere in Canada to the present day.

The Medicine Act, 1991 is proclaimed in Ontario.  Only members of the College of Physicians and Surgeons of Ontario can use the title “osteopath”, an abbreviation or variation in another language. 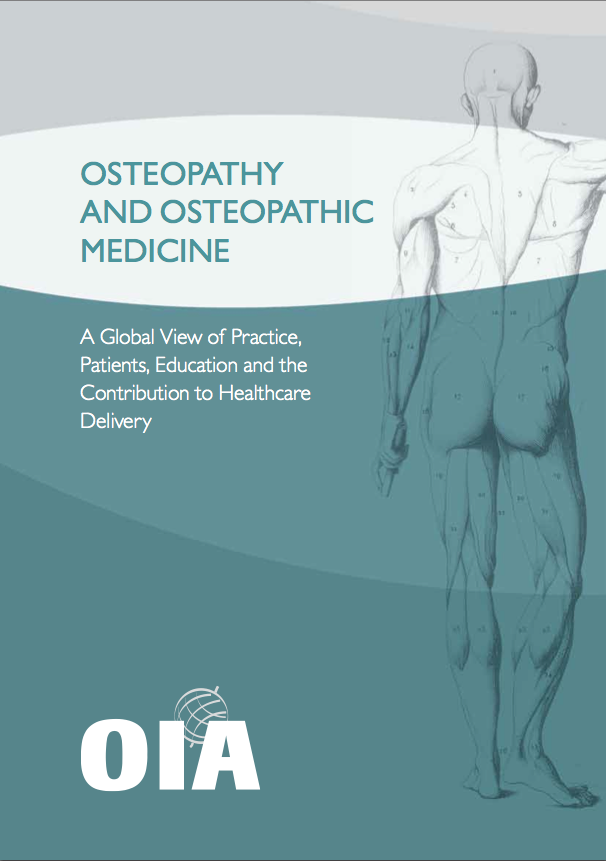 Osteopathy and Osteopathic Medicine: A Global View of Practice, Patients, Education and the Contribution to Healthcare Delivery.

The document was created at the request of our members during the 2010 San Francisco Annual Conference, in order to augment the World Health Organisation’s Benchmarks for Training in Osteopathy. The report is supported by OIA surveys that produced an audit of current osteopathic practice, based on a global ‘snapshot’ of patients, as well as a survey of osteopathic organisations and practitioners in more than 30 countries.

Osteopathy and Osteopathic Medicine: A Global View of Practice, Patients, Education and the Contribution to Healthcare Delivery describes the current state of the osteopathic profession globally and how it functions within national health delivery systems across a range of countries. The report builds upon the OIA’s Status Report document, published in March 2012.

The WHO was involved the preparation and layout of the document, following a formal meeting at our 2012 Paris Conference, where it was recommended that the report serve as an initiative to document the growing significance of osteopathic healthcare worldwide. The WHO also contributed a foreword to the report.

Osteopathy and Osteopathic Medicine is presented in four parts: the concept, history and spread of osteopathic healthcare; practitioners, patients and the scale of osteopathic practice; models of education and regulation; and efficacy, safety and cost-effectiveness. It brings together data from a range of international sources including a survey of international practice and a census of covering 33 countries.

History and Current Context of the Osteopathic Profession

The statutorily regulated models of USA, Europe and Australasia are referenced. Details such as standard curricula, core competencies and practice standards are part of the Annexes below.